Anyone else still buzzed from that Thursday’s comeback ? If there was ever a true definition of “team effort”, Thursday night was the epitome of it….

136 years. That’s the combined amount of years these 2 teams have gone without winning the big prize. In the time the Dodgers last won a World Series our country has endured 2 Bush’s and when all is said and done we may go through a 2nd Clinton…(Witholding all political thoughts…It’s October, not November folks…)

Even with all talks of past curses, the Cubs are still the favorites among the pundits to go make it back to the Fall Classic for the first time since 1945. Many a local college graduate wasn’t around during the Dodgers last taste of glory in ’88. Many generations of Cubs fans have never experienced the big prize, one that includes Mr. Henry Warnamont ( For you Gen X Dodger fans out there who remember this Punky Brewster episode…)

So, how do these 2 teams match up? During the regular season both teams took care of business on each other’s home field with the Cubs coming out with a slight edge, taking 4 of 7 from The Blue. During their last series at Dodger Stadium in late August it was the pitching, especially the bullpen that keyed their 2 wins by scores of 3-2 and 1-0.  The Cubs boast a deep rotation in which even their 4 starter in John Lackey can go deep into the 6th and beyond. The Dodgers rotation has been a battered bunch that has relied heavily on the bullpen throughout the season. It’s a true testament to Dave Roberts that with all the injuries particularly to our starting rotation that The Blue even made it to October.

Kenta Maeda is slated to start Game 1 in Chi Town against Jon Lester. While Maeda has had a stellar season with 16 wins, questions have come up lately about his durability. With that in mind, it’s highly probable that our bullpen will have to come through once again. If Maeda can hold it down for at least 5, we got a chance to steal Game 1.

This series has the makings of a low-scoring affair. If the pitching on both staffs comes through as advertised, every run will be at a premium. The Cubs present a much deeper lineup than The Blue and deserve to be the favorites. That’s ok. The Blue have been underdogs all season long and longtime baseball fans and even the players and coaches will tell you the playoffs are all about who gets hot at the right time.

Cubbie fans, I feel your suffering. We may not have suffered as long as you but 28 years is still a long time. I was a high school freshman the last time we won the big prize. I’m less than 10 years away from 50. I may “quite” feel my age, but I’d like to see the grand prize come back to The Ravine before I hit the halfway century point.

Back in April, I said The Blue would take the NL West with 91 wins…Check…Back in April I said it would be a Dodgers-Cubs NLCS…Check…Would you all like to know what else Drei here said back in April? Well, we’ve made it this far, and I don’t see any reason why I should take anything back…Does Drei here make it a trifecta? As the good folks at some major network have said, you can’t script October.

Though not seen as much during this past year, to many a Cubs fan, that “L” flag has been a familiar and frequent sight. Let’s hope we see it 4 more times…

9th Inning…The Evolution of a Curse 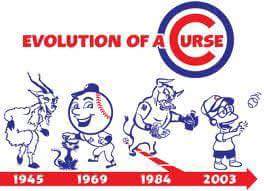