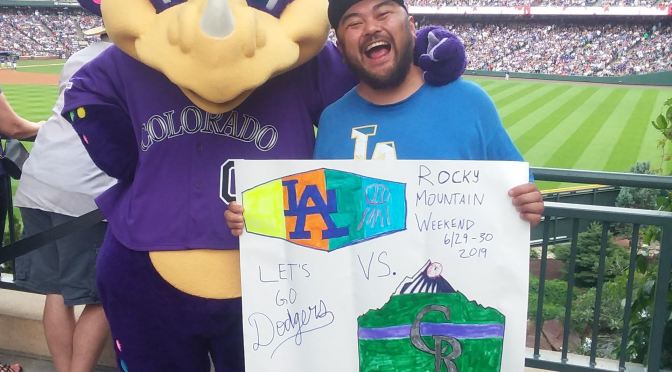 It’s a baseball fan’s dream to venture to all 30 MLB parks. Along the way, some minor league yards and an international yard or two may be on the list. As for me, I still got a ways to go before I hit up all 30. But prior to this season, I made it a personal goal to catch a Dodger game in all NL West yards all in the same season.

Though I wasn’t the best good luck charm on the road this season, the Dodgers have more than held their own as they prepare themselves for a 7th straight NL West title and another deep October run.

The journey through the NL West was an exciting one. Each yard and city has it’s own story. And of course, each yard has it’s own personality.

I’ve always believed that the best yards in baseball reside here in the NL West. Putting aside my personal biases toward our beloved Chavez Ravine, how do the rest of the yards in the NL West stack up with Drei?

Of the 5 yards in the NL West, this is easily my least favorite. Having said that, there still some redeeming factors that make Chase Field enjoyable, such as the Friday’s Front Row Bar & Grill above left field and it’s patio that gives fans an opportunity to dine with friends and family while taking in a ballgame.

Kid n Drei pregaming at Friday’s before the Dodgers-DBacks game, 8/31/2019

The retractable roof is a nice convenience from the scorching desert weather and on that rare occasion when the yard is filled, as it was on this evening as a Chase Field record crowd of over 50,000 we’re on hand (You can thank us Dodgers fans for bumping up those numbers…), the atmosphere can be electric.

Aesthetically, this is decidedly the least attractive of the other 4. Though the roof is a nice convenience, when closed, you get the feel of watching a game inside a huge airport hangar. Or as my former supervisor who now resides in Phoenix once told me, it has the excitement of going to Costco.

Though established in 1998, just 2 years before Oracle Park, The Snakes are looking for new digs. Though Chase Field is only 21 years in existence, we’re in the era of the disposable ballpark.

So Chase Field may not rank so highly among ballpark travelers and baseball fans. It’s main signature feature is a pool that in only available to private groups. But after only 21 years is a new yard really necessary? 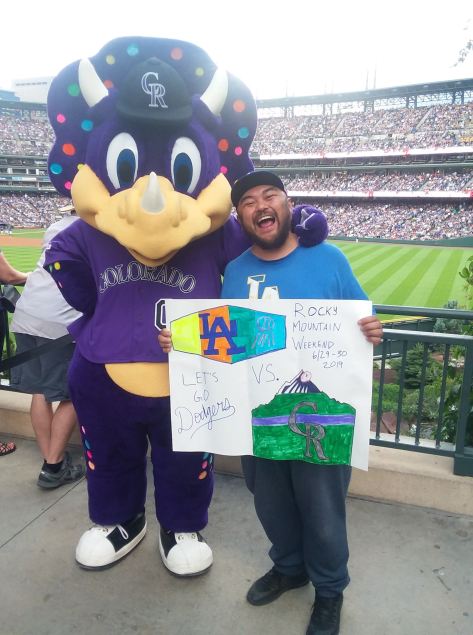 If there’s one thing Dinger and I have in common, it’s our disdain toward that Seal up in San Francisco.

Of the other 3, it’s very easy to put the remaining NL West trio in any order. Coors Field, opened for business in 1995 is the 3rd oldest yard in the Senior Circuit behind Wrigley Field and Dodger Stadium. Not bad company to be with for a yard soon approaching it’s 25th year.

Opened for business 3 years after Oriole Park in Baltimore, Coors Field opened it’s gates at the height of the 90’s retro yard craze. I’ve often stated that the term retro is often overused. However, with Coors Field, the elements within the yard justify it’s status, or at least it’s exterior, blending in with the continuously developing LoDo neighborhood…

With the Rockies in playoff contention at the time of our visit, Coors Field was filled to capacity during the 2 games we came. Coming off of last year’s playoff appearance after finishing one game behind The Blue, there was a buzz felt throughout the weekend. The Blue would split the two games that my buddy Josh and I attended.

Recent changes to Coors Field was the elimination of outfield upper deck seats behind right field, replaced with The Rooftop.

It’s a great social spot for the casual fan and a great way to get in the yard on the cheap. But if you come to ACTUALLY watch the game, get yourself a seat, even if you land one on the Purple Row.

The landscape beyond CF add’s to Coors Fields charm, surrounded by local natural rocks and greenery complimented by a water display. 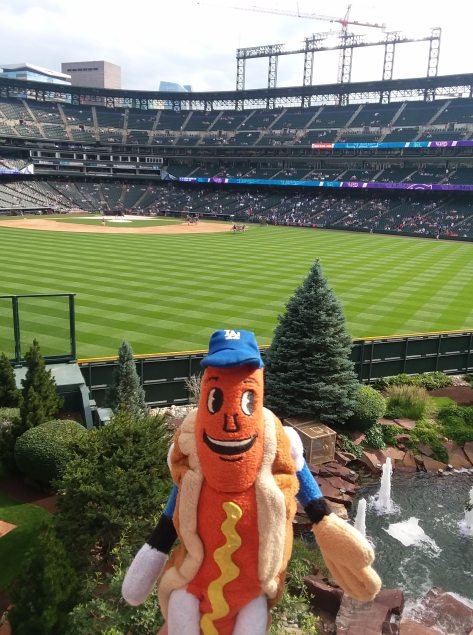 Hey Blue Dog! You sure like traveling with Drei !!!

If you should be so daring, do try the Rocky Mountain Oysters at least once. 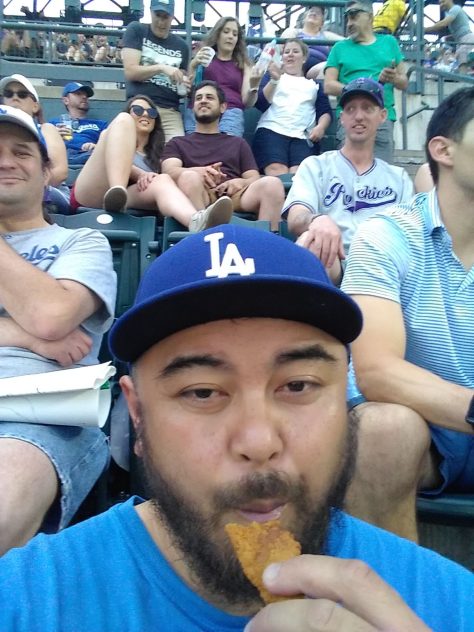 If that’s not enough, try out the Rocky Mountain Oyster Stout at nearby Wynkoop Brewery.

See you made a new friend Blue Dog!!!

Western Metal Supply Co. Building, from the outside…

Daytrips to San Diego are a regular occurrence for the Dodger Blue Faithful as many a Dodger Blue clad fan makes the trek down I-5. Next to Coors Field, Petco may have the best neighborhood vibe of the yards here in the west, with it’s location right next to the Gaslamp.

The Garv. First number ever retired by the Padres. Of course it took a Dodger to accomplish this feat…

And finally, again putting all biases aside and to the dismay of some…

Soon to be in it’s 20th year, Oracle Park is now under it’s 4th name. In spite of certain locals of all ages, including some old enough to be my grandfather, personally wishing me ill will, I really enjoy Oracle and The City.

Though The Blue would fall on a Buster Posey walk-off, on a personal note, my record over the years at Pac Bell/SBC/AT&T/Oracle Park is 10-9. 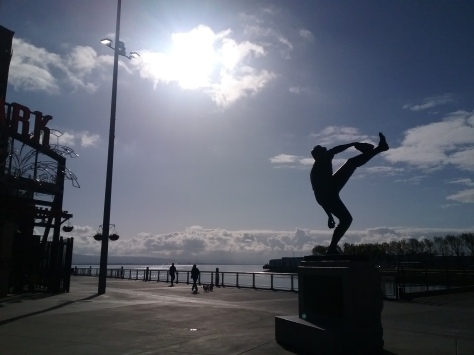 Oracle Park is one of those yards if your visiting for the first time you’ll want to arrive early to check out the various viewing points. Before setting foot inside Oracle take a stroll along the portwalk. Check out the distant views of the bay and the kayaker’s setting up shop along McCovey Cove.

Cody Bellinger has already deposited one to The Cove. It’s only a matter of time Joc drop’s one in…

If you end up in Oracle’s upper reaches, don’t see it as a bad thing. Next to PNC Park in Pittsburgh, Oracle has one of the big’s most distant picturesque views with The Bay as the backdrop… 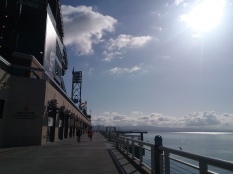 As for the food, if you really wanted to you could spend the whole game on a food run. On this night, I went with the 40 clove garlic chicken sandwich and garlic fries. 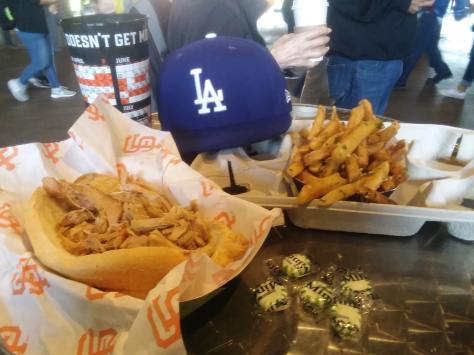 So there’s my wrap around the NL West. I can now say I’ve chased The Blue in every NL West yard in one season. Here’s more from my visits to Oracle Park, Petco Park, Coors Field Day 1, Coors Field Day 2 and Chase Field.

As if I didn’t have enough, I also had a chance to catch The Blue in Charm City, Baltimore. Charm City report coming soon…