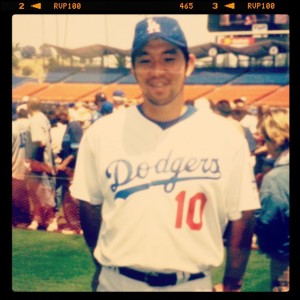 Hideo Nomo would spend two stints in the Dodger Blue, from 1995-98 and 2002-04 sparking  Nomomania. From ’95-97 Nomo would strike out over 200 batters while also pitching a no-hitter at Coors Field of all places…

Other Dodgers to Wear Number 10

Happy Friday… From Kid N Drei…What it Be? What it Do ?

Rick Monday would patrol the Dodger outfield from 1977-1984 wearing number 16. His most memorable moment in a Dodger uniform would come in the decisive Game 5 of the NLCS on October 19, 1981. With the Dodgers and Expos tied at 1 in the top of the 9th and 2 outs, Rick Monday would deliver the decisive blow with a solo home run that would be the difference in a 2-1 win over the Expos, sending the Dodgers to the World Series to take on the Yankees. The day is still referred to in Montreal as Blue Monday.

Andre Ethier, photo credit to Jon SooHoo. Andre, with 14 walk-off’s, his latest against the Angels on August 2nd, is currently the longest tenured Dodger, now in his 10th season beginning in 2006…

Other Dodgers to Wear 16…

3 of the Dodgers to don the number 16, Monday, Ethier, and Lo Duca, at one time played their college baseball at Arizona State…

16×2… Celebrating Perfection On This Day 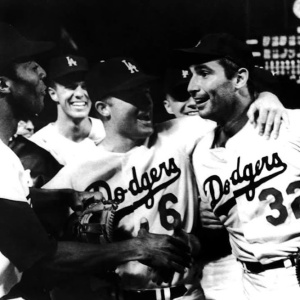 On this day, September 9, 1965, 50 years ago, Sandy Koufax would throw a perfect game no-hitter against the Chicago Cubs. It still remains the only perfect game thrown in L.A. Dodger history…

Extra Innings With Kid N Drei… From The Park…

Kid n Drei, from the Park at the Park, PETCO Park in San Diego, re-creating last season’s foam party . I guess we’re never to old to have some fun at the Park… ( Who was having the most fun ? Kid or Drei ? ) Kid n Drei got more from the park… Stay Tuned… ‘Til the Next Episode…

On the eve of the 109th World Series will mark 25 years now since the Dodgers won their last World Series title, let alone appear in one.  While I enjoy telling stories what it was like being a fan experiencing the Dodgers triumph in 1988, explaining the feeling to the fans who have potentially graduated college in the last 4 years certainly is not making me feel any younger.  Now that I have all but let it out that i’m up there in years, lol, let’s now look back on the last 25 years, first with the 90’s, with it’s highs and lows.  And let’s hope by this time next year i’m writing a piece about The Boys in Blue in the World Series.  But first…

OK. Let’s look back upon the last 25 years of non World Series years

Despite leading the NL with a team ERA of 2.95, the last time anyone finished the season with a team ERA below 3.00, the Dodgers, one season after shocking the world, would finish in 4th place 14 games behind the Giants. So anemic was the offense that Orel Hershiser, despite winning 15 games with an ERA of 2.31, would also lose 15 as well , finishing the season with a .500 mark.

So the 80’s finished on a down note. However, the Dodgers was still a strong decade for the Boys in Blue, winning two World Championships (1981 and 1988), four National League Western Division titles (1981, 1983, 1985 and 1988) and 825 games, tying them with the St. Louis Cardinals for most victories by a National League team during the decade. The 80’s was also a strong decade in L.A. sports as well. Between the Dodgers 2 titles, the Lakers 5 titles, and the Raiders lone Super Bowl in 1983 9 This is a 49ERS fan acknowledging this), 8 championship titles we’re won for the great city of Los Angeles. Oh yeah, let’s also not forget the 1984 Olympics, with baseball debuting as an olympic sport here, played at, of course, Dodger Stadium. Those we’re some fun times as a sports fan in the 80’s. The 90’s certainly look promising, right ? 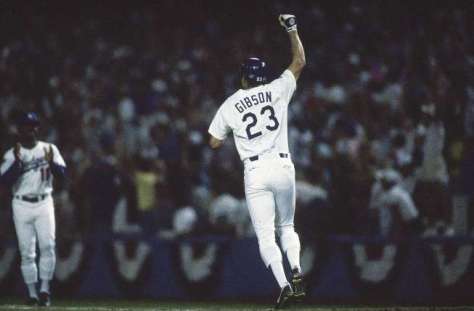 The United States enacts Operation Desert Storm, destroying the Iraqi army and ending the Gulf War in a few short weeks. A video is released of driver Rodney King being beaten by L.A. police officers following a traffic stop, igniting a national controversy. Bill Clinton is elected the 42nd president of the United States. Magic Johnson announces his retirement from the NBA after contracting the HIV Virus ( What’s Magic up to these days ? ). In the meantime, on the field…

Even without Orel Hershiser for much of the season due to shoulder surgery and an injury plagued Kirk Gibson a mere cry from his 1988 season, the Dodgers would finish 5 games behind the eventual World Champion Cincinatti Reds. This would also be the last season for Fernando Valenzuela in a Dodger uniform, as he would be released prior to the 1991 season.

Hometown product Darryl Strawberry, who put up big numbers in his eight stormy seasons with the New York Mets, would be signed in the off-season for a then whopping 5 years, $20.25 million dollars. After a slow start, Strawberry would lead the team in both home runs (27) and RBI’s (100) In spite of a strong 20-8 finish to the season, the Dodgers would finish 1 game behind the upstart Atlanta Braves for the NL West crown.

Eric Davis, the one time Cincinatti Reds outfielder, would team up with childhood buddy Darryl Strawberry in the outfield. However, both Strawberry and Davis would miss much of 1992 and the Dodgers, for the first time since 1905, would finish the season in last place

In the final season before the current 3 division alignment, the Dodgers would improve upon their 1992 performance by 18 games. Though they would miss out on the post season , the second of 5 consecutive Rookie of the Year winners would don the Dodger Blue as Mike Piazza , with 35 home runs and 112 rbi’s, would take home the prize, Eric Karros winning the award in 1992. 1993 also marked the final season a 100 plus win team would miss out on post-season play as the Dodgers, on the final game of the season, highlighted by Rookie of the Year winner Mike Piazza’s 2 home runs, would knock out the Giants 12-1, leaving the Giants 1 game behind the Atlanta Braves for the NL West crown ( Yup, I was at that game folks ). The following season would be the year divisional re-alingment would take place as well as the wild card. From 1969-1993, only the division winners qualified for the LCS. So yeah, had the wild card been in effect in 1993, the Giants would have easily made the post season. Bummer huh ? ( In my sarcastic voice, LOL )

In the first year of 3 division aligment, the Dodgers would finish in 1st place, and yes, that is an asterisk next to the feat, if one can consider being 2 games over .500 one. That is because in August, a bitter labor dispute between the players and owners would lead to the cancelation of the remainder of the 1994 season and wipe out post-season and World Series play altogether. Raul Mondesi would win the 3rd of 5 consecutive Dodger Rookie of the Year Awards. Darryl Strawberry, with his countless off the field problems during his time in L.A, would be released prior to the season.

One year after the strike had put a black eye on Major League Baseball, in a 144 game season due to the previous season’s strike that carried over into 1995, the Dodgers would capture the NL West by one game over the Colorado Rockies 3 years into their existence. Hideo Nomo, The Tornadoe, would win the NL Rookie of the Year. In the first official League Division Series, not counting 1981’s ” intra-division playoffs “, the Dodgers would be swept in 3 straight by the NL Central Champion Cincinatti Reds.

Tommy Lasorda, one of only two L.A. Dodger managers along with Walter Alston dating back to their arrival from Brooklyn in 1958, would step down from his managerial duties after suffering a mild heart attack. Bill Russell would take over the reins for Tommy. With a 2 game lead over the Padres and 3 to play against the Friars, San Diego would sweep all 3 games at Dodger Stadium to win the NL West by 1 game, pushing the Dodgers to Wild Card status. They would be swept in 3 straight in the LDS by the Atlanta Braves, ending the season on a 7 game losing streak. Todd Hollandsworth would round out the 5 consecutive Dodger Rookie of the Year Award winners

The 5 consecutive ROY’s would surpass the 4 consecutive the Dodgers had from 1979-1982 when Rick Sutcliffe, Steve Howe, Fernando Valenzuela, and Steve Sax won the prize

This time, a late September swoon would cost them. Leading the NL West over the Giants by 2 games on September 16, they would be swept in a crucial 2 game series in San Francisco, the beginning of a 1-6 stretch that would find themselves 2 games behind the hated one’s heading into the final weekend of the year, in which the Dodgers would eventually finish 2 games behind the Giants but miss out on the Wild Card. This would also mark the final season of ownership under the O’Malley family

In their first season under the Fox group, Mike Piazza , after a lengthy contract dispute, would find himself traded to the Florida Marlins along with Todd Zeile for Gary Sheffield, Charles Johnson and Jim Eisenrich before landing with the Mets one week later. With a 36-38 record in June, Bill Russell would get his pink slip, as well as general manager Fred Claire. The thought of a Dodgers manager was unheard of at the time considering up until 1998 they had only 3 managers. Glenn Hoffman, brother of Padres relief phenom Trevor Hoffman, would finish out the season as the skipper. 1998 would also be the year that future Dodgers hitting coach Mark McGwire and Sammy Sosa we’re involved in the home run record chase, with McGwire finishing with 70 home runs.

Though he did put up big numbers in Dodger Blue , Piazza will forever be remembered as a Met. To this day, I still don’t believe he has buried the hatchet towards the Dodgers and his fans. I wonder if he will blame me next for the Dodgers fans turning on him .

Davey Johnson would take over as manager, and Kevin Brown, coming off 3 straight dominant season and two World Series appearances with the Marlins and Padres, would be signed to a 7-year $105 million contract just one year after Piazza had been offerred 6 years at $80 million, rasising some questions amongst the fans why the same deal could not be offered to Mike, an everyday player, as opposed to Brown, who only toes the hill every 5 games. The Dodgers would finish 24 games behind the 2nd year Arizona Diamondbacks.

So the 90’s we’re not exactly some glorious times for L.A. sports fans. The Lakers, though they would continue to make it to the post season, making the playoffs in 9 of the 10 years, also failed to bring L.A. another championship . The Raiders and Rams would leave L.A. after the 1994 season ( I really didn’t care since i’m a 49ERS fan ) , the Clippers we’re a far cry from what they are today, and the Kings would appear in the Stanley Cup in 1993 to lose to the Montreal Canadiens in 5 games. So next, the new millenium. Glory day’s are bound to return to L.A, right ?